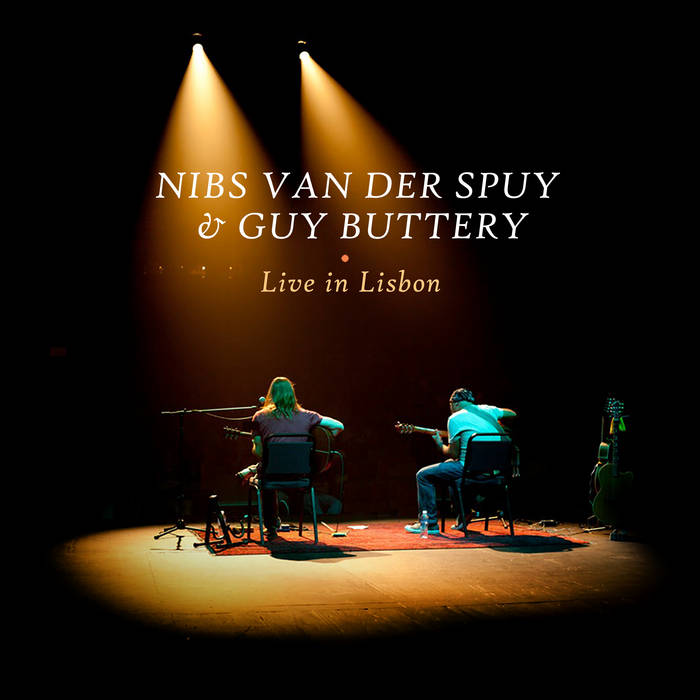 henbaa Wish we've could have been there!
What an amazing evening this must have been

hjerlmuda Just phenomenal, this intuitive interaction between two eXTremely talented live musicians...thank you so much for the music! Favorite track: Trample on Lions.

After an 8 year silence on the recording front, Nibs van der Spuy and Guy Buttery announce their sophomore release as a duo. Recorded at the end of 2019 in Europe, "Live in Lisbon" see's their return with a stripped-down performance beautifully captured beside the mighty Tagus River just outside the capital city of Portugal.

Described by FanBible as "the finest collaboration between two South African musicians", 2012 saw the release of their critically acclaimed debut, "In The Shade of the Wild Fig". Nibs and Guy were touring in France and decided backstage at a festival that it was finally time to put down a collaborative release. For over a decade they had contributed to each other’s recordings and had performed countless shows together all over the world, so finally, in between their respective schedules as solo artists, their first album was released. "In The Shade of the Wild Fig" was met with high praise across the globe and was nominated for a South African Music Award later that year.

The real magic of a Buttery/van der Spuy performance is in the moment, with a constant and spontaneous exchange of energy which transcends their individualities as two separate parts, shaping up something entirely new. Rolling Stone Magazine spoke of this as well saying, “their individual and quite distinct finger-style techniques fit each other like the proverbial glove.” "Live in Lisbon" holds true to this too. Guy Buttery comments, "knowing Nibs so well as a friend, often reminds me of how transparent music really is. We both always talk about the ability to 'see' where either of us are taking the music with each moment, and more importantly what each other's intention are when going in a certain direction. This always feels very special to bear witness to". This concert recording also acts as something of a "best of" from their twenty year partnership showcasing their profound abilities to explore each piece, interlocking with tightly fused dynamics as well as featuring new and unrecorded songs.

Recorded in Belém just outside Lisbon, this little seaside town was the launch pad for the countless ships which sailed into the unknown in search of new frontiers over 500 years ago. Vasco de Gama, set sail from there in 1498, and named Natal after arriving on Christmas day in the seaport before it became Durban, in KwaZulu-Natal where both Nibs and Guy hail from.

Nibs van der Spuy recalls the night: "It had been a good while since we had played live together, but all the essential ingredients were still very much present. Neither of us were aware that everything was perfectly in place and that we were being recorded. From this intimate setting in Portugal, with a bunch of beautiful people who came from all corners to be a part of this wonderful evening, we are incredibly happy to share this recorded moment with the rest of the world."

Take a listen to their debut studio release here - nibsvanderspuyandguybuttery.bandcamp.com

Recorded live in concert at Espaço Espelho d'Agua, Belém, Lisboa in Portugal on the 7th September 2019

Much thanks to Ines Valle and Mário Almeida in Lisboa